The World of Aphids – Know Your Pests Better!

Ever wondered about giving an aphid a closer look? You can try spotting them in the woods near your homes but you’d most probably miss them. They are soft and tiny insects, about 0.04 to 0.39 inches to be precise. Within this length is a pair of tiny eyes, a needle-shaped mouth that enables them to suck. Most of them do not have wings and have three pairs of legs! Besides, they also have two antennae. That’s quite a bit managed in such a small body, you’d say. Yes indeed. They come in myriad colors of red, blue, yellow, orange, green, purple, brown and black, depending on the species they represent. No matter what the species, their control and management methods remain the same.

Aphids are not just active during the day, but can be called nocturnal as well. They consume food both in daytime and at night. They feed on the sweet and sugary sap of plants and very well manage this feat thanks to their needle-shaped mouths piercing into the leaf, stem, buds and the root regions of the plant.

The sap contains proteins in barely minimum quantities and the aphids require huge amounts of protein to function. To satisfy this demand their bodies makes, aphids ingest large quantities of plant sap. 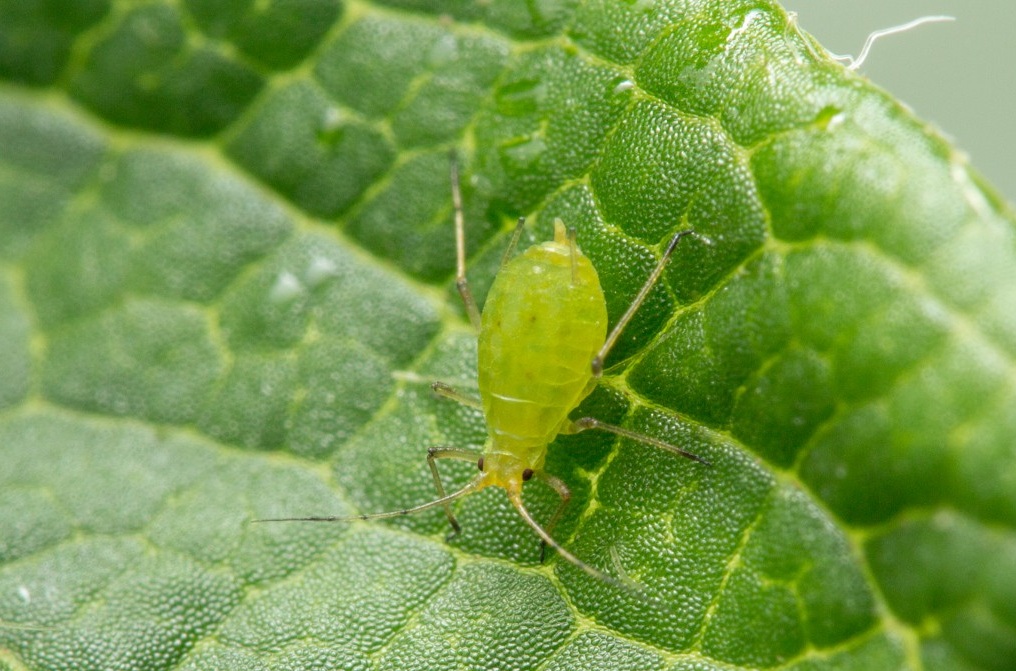 Aphids eliminate their excess food as sticky droplets known as honeydew, and it is the favourite food for many ant species. For this very reason, ants and aphids form a symbiotic relationship. The ants protect aphids from predators, parasites and the cold weather, so that they have access to their precious honeydew. To ensure that the aphids are protected, the ants keep the aphids inside their anthills during winters and deposit them back on plants once the winter is over and spring begins.

So long as ants are present, they act as survival insurance for aphids. For some ants honeydew constitutes 50% of their diet. What’s more amusing is how the ants wiggle out the dew from the aphids. The ants are master ticklers. They tickle the belly region of the aphid so as to procure the honeydew excreted out and feast on them! The honeydew farmed out by ants is deposited on the plants as mold, the black sooty fungus found around aphid colonies.

Ants not only protect aphids from predators but enable them to build bigger and far more resilient colonies, thus ensuring their need for honeydew is met bountifully!

What does the aphid development lifecycle comprise? The aphids give birth both sexually and asexually. The aphids reproduce sexually, in the autumn season. There are 3 distinct stages in the lifecycle of an aphid reproduced sexually.

There is an interesting adaptability to nature that one can notice about aphids. In regions where food is scanty, the females can produce a whole generation of winged-aphids which can fly to other, new hosts and establish their own new colonies.

Another interesting point to note is that aphids can also reproduce asexually by a process known as “Parthenogenesis”. Here the females are born pregnant, therefore eliminating the role of males entirely in the reproduction process. Similar to adeveloping in the mother’s womb, the organs of theaphid develops within the mother and finally mother directly gives birth to the aphid which is a clone, or the exact genetic replica of the mother.

Ladybugs, pirate bugs, big-eyed bugs, lacewings, crab spiders and stinging wasps are the natural predators of aphids. Some species are unpalatable because of their tough skin and spine.

When attacked, the aphids struggle by using their hind legs to fight against predators or even roll off their host plant to escape from danger. Many aphids also have tube-shaped structures called cornicles on their abdomens that release a waxy, foul smelling substance to repel predators. They also release pheromones to warn the other members of the colony of impending danger.

First off, let’s shed light on aphid points to ponder about!

On an average, one aphid can produce over a hundred more aphids in about 4 weeks. The aphids tend to have a particular breeding season. In Pennsylvania, the maximum migration and dispersal season or the season for breeding is summer – June to mid August.  It is noticed that the warm weather gets the aphids warmed up and activated as well! In the winters, they are quieter, taking refuge in the perennial weeds and bushes.

Aphids are plant virus carriers. This means that if your plant is infested with aphids and if some are plant virus carriers, chances are that the virus is transferred to the plant and in no time, the entire plant is rendered sick. What’s more, the seed from the sick plant will also be carriers of the virus. So for an infected plant it is a matter of sink or swim. In most cases, once rendered sick, it’s better to quell the plant, to stop the virus from affecting any seeds, plants and the entire crop thereof.  An infected plant is no good a resource to share further or reap benefit from. Plants prone to these viruses include – cucumbers, pumpkins, melons, beans, potatoes, lettuce, beets, chard and bok choy.

Nature is imbued with ways and means to control these little pests. This is a world of discovery by itself!

For instance, plants can very well take care of themselves against aphid attack, even without any human intervention! All that is needed is a healthy environment for crops to grow in – healthy soil and watering. The luscious environment does the trick, and produces crops that can fight off the aphid attack completely!

Lacewings, syrphid flies and lady beetles larvae love to nurse on aphids. Larvae consume 20 aphids a day and a grown lady beetle more than 50 aphids daily depending on the beetle species.

The good news is that most aphids cannot fly and so their entire lifecycle is restricted to one single plant. If, for some reason, they ever get disengaged from their host plant, they cannot return to their host! There are a few exceptions. A few aphids develop wings when there is food scarcity. They can fly to other hosts, especially during warm climate and therefore spread their tribe! These can be restricted by simply spraying water, which dislodges the aphids, sends them straight to the ground and they starve to death.

Artificial Methods, Not Always a New Lease of Life!

Studies revealed that the release of lady beetles into the fields, to feed on aphids, especially if not locally sourced, cannot catch up with aphid growth even though they are aphids’ natural predators. Yet, if you wish go ahead, water the area at dusk and then release the store packaged ladybugs.

Also, remember in the case of aphids, prevention may not be the best medicine for cure! If you sprayed pesticides, instead of killing the aphids, the chemicals may kill the predators of aphids instead. This measure may be counterproductive and only aid in the increase in aphid population.

In general soaps and oils can cause problems when the weather heats up, and only aid in burning the plant. If you still wish to go ahead and use it, wait till the weather cools off or till the sun sets.

If you thought an insecticidal soap killed aphids, think again! They are meant to kill soft-bodied insects. The soap cannot differentiate the soft body of an aphid with any other. All it does is dry out the skins of these soft-bodied pests. The larvae of predators like lacewings, syrphid fly and lady beetle are soft-bodied too and get killed in the process. And the killing of predators in their larval stage is only counter-productive the effort towards elimination of aphids. So the fact that it is environmentally friendlier than harsh chemicals can hardly be of any advantage to the overall plant health. So exercise caution!

The capsaicin in pepper sprays are toxic and can eliminate honey bees altogether! So if you plan to mix up a batch of hot pepper juice and spray it around, think of the honey bees. Besides, it can also cause membrane damage, it is that lethal! Garlic, pepper and onions are also used as repellents.

They are better suited because they don’t kill new insects that fly in after the application. That is an advantage right there! That said, they still kill the beneficial insects during application.

Plain water would simply do the trick! Get the hose outside your garage and just spray water on the plants at high pressure. This is enough to knock the socks off the aphids! The aphids simply get thrown away by the force of water onto the ground. Once they lose contact with their hosts, they are rendered almost immobile, so they just fall on the ground and perish. Spraying with milk based sprays is an even better idea. A coating of milk on your plants leaves it less susceptible to future aphid attacks. Alternatively, do not fertilize! The soil nitrogen will then encourage plant growth and new shoots.

The reflective mulches have a dual benefit. These mulches have a reflective silver coating that reduces the  aphid transmission during summers. Studies have shown that there is a huge yield of crops owing to the increase in the amount of solar energy reflecting onto the leaves.

These are also available for aphid management, primarily for woody ornamentals. They include imidacloprid, which  very effective and particularly significant for serious infestations of aphids such as the woolly hackberry aphid, which is often not effectively controlled by biological control or less toxic insecticides. Imidacloprid can have negative impacts on predators, parasitoids, and pollinators, so its use should be avoided where soaps and oils will provide adequate control. To protect pollinators, do not apply imidacloprid or other systemic insecticides to plants in bloom or prior to bloom. 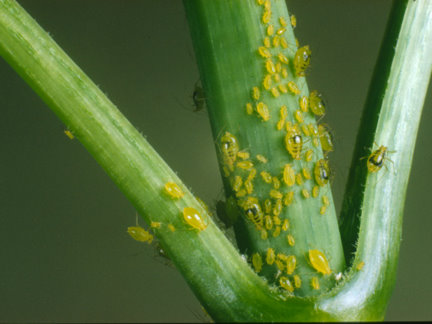 Home-use soil-applied imidacloprid products are often diluted with water in a bucket and poured around the base of the tree or plant. Professional applicators can use soil injectors, which provide better control with less runoff potential. Applications are usually made in spring when aphids first become apparent.

Adequate rain or irrigation is required to move the product through the soil to the roots and up into large trees, and it may take several weeks to see an effect on aphids feeding on leaves. One application on hackberry is enough to control hackberry woolly aphid for two to three years.

Effective management and control of aphids requires effort on the part of the agriculturist, particularly if cultural and bio-control methods are used. The grower must be familiar with the identification and life history of the problem species, as well as anticipated predators and parasites, and have an intimate knowledge of the growing conditions of their plants. Non-pesticide alternatives are more physically and intellectually involved.

The most effective pest control is population management using combinations of environmental conditions, biocontrol agents, and different categories of pesticides.

Share
Previous How Do You Control House Flies using Sprays?
Next A GLIMPSE INTO THE LIFE OF PEA APHIDS