Do Yellow Jackets Bite or Sting?

Yellow jackets sting with a barbless stinger & they also bite with their mandibles!!!, but wait you must know more about this wasp.Yellow jackets are eusocial wasps that have a distinct class system. These omnivorous insects are considered to be very useful to humans as they help in eradicating agricultural pests and dangerous insects by feeding on them. In spite of their usefulness, yellow jackets pose a sting hazard as they are aggressive by nature. They may not pose a threat until they sense a potential threat to their nest. They are capable of inflicting multiple stings and hence for those who are allergic to wasp stings, it can well become a doomsday.

What are Yellow jackets bites? 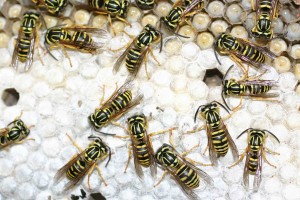 Yellow jackets bites are referred as stings as they inject the venom with the help of the stinger. Also they have a smooth stinger that makes them more dangerous than the bees as they are capable of inflicting multiple stings on their victims.  Yellow jackets can aggressively defend their nest and hence it is recommended not to tamper with one if you happen to come across it. Most often than not, since yellow jackets build ground nests, people can accidentally trample over it in the landscape that can instigate ferocious attacks by these species.

Are they less Painful?

Read about the Life Cycle and Habits of Yellow Jacket

2013-07-24
Lakshmi Priyanka
Previous Yellow Jackets in House – Find Them Before it’s Too Late
Next Yellow Jacket & Bald Faced Hornet Scientific Name – Do You Know It?