Yellow jackets are common in the North American continent and can be seen in numbers during the spring and summer months. They belong to the Vespidae family of wasps. They look similar to bees with their prominent yellow and black coloring and hence more often than not are mistaken to be bees. They are also commonly referred to as ‘ground bees’ due to their distinct ground nesting habits. 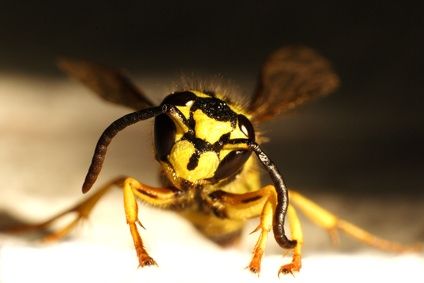 Yellow jackets can be seen collecting nectar from the flowers. They are not honey makers like the bees therefore collect nectar for self consumption and for feeding the larvae and the queen in the nest. Though they are predatory wasps, they are omnivorous and hence consume both animal as well as plant matter. They consume nectar during the late summer time when the insects that they feed on become scarce. Though they also help in pollination due to this fact, they are not able pollinators as the hairy bodied honey bees.

Yellow jackets are considered as useful insects as they help in eradicating agricultural pests and poisonous insects. Their scavenging role makes them a part of nature’s waste management system as they feed on leftover food and carcasses of dead animals and birds. Yellow jackets are colonial wasps that have a distinct class system that separates the reproductive queen from the sterile female workers. This class system separates them from the other wasps and is found similar to that of the bees.

The yellow jackets build nests made of paper like material that is made by chewing wood. Most yellow jackets nests can be found in the ground and some of them build aerial nests as well. Unlike the wasps and the bees, the yellow jackets live only for a single season. Young fertilized queens wait out the winter to build their own nests in the following spring.