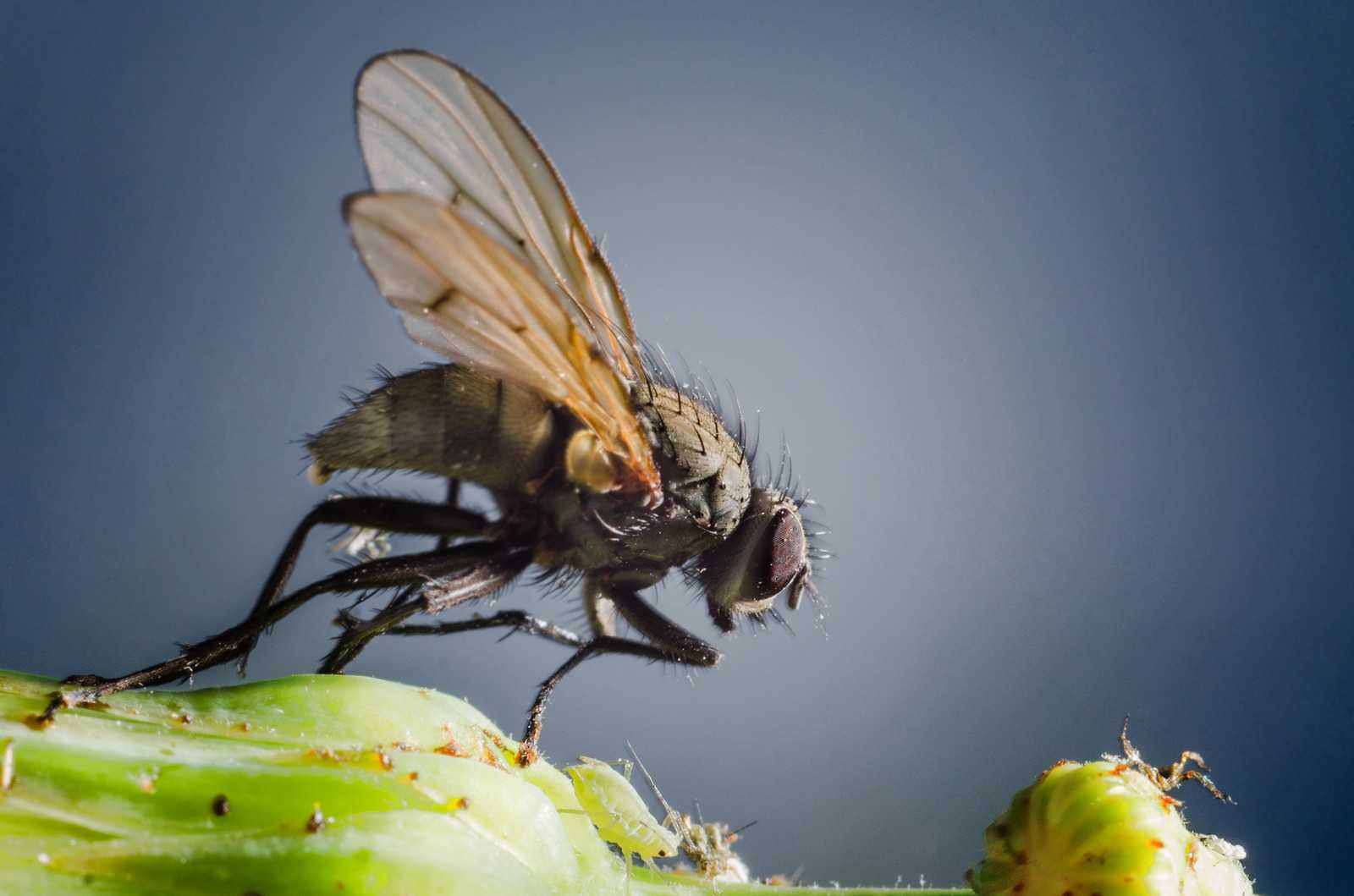 The Common housefly is one of the most commonly found insects across the world. Though it is a common specimen, there is much to be learnt about this insect, which has the potential to spread some of the most common diseases. This article helps you understand the Housefly Anatomy in detail.

Did You Know
Houseflies love warmth! They can grow fast in warmer temperatures

How the Housefly Muscles Up in Physique!

Classified under the domestic species of genus Musca, this prominent insect adult can be sized anywhere between 4-8 mm. An average adult is 6.35mm in length with .012g in mass and a wingspan of 13 – 15 mm. Their smooth and shiny bodies are pointed at the anterior end, blunt at the posterior, and contain two spiracles.

Very similar to most insects, the housefly’s anatomy can be divided into three body parts – the head, thorax and abdomen. Adding to that is the hard exoskeleton and the six jointed legs. If you have a chance of taking a closer look at the common housefly, you will be able to see the small spines that lie ventrally between abdomen 1 and 7 while there is no trace of it on the thoracic segments. This is visible to the naked eye thanks to its transparent wings.

The body of the fly is covered with hair-like projections that are used for tasting and smelling. The four longitudinal lines seen on the back of the housefly is the Thorax. It can be either black or gray in color. The abdomen region of the housefly is either gray or yellow in color. A median line can be seen with a yellowish spot at the anterior lateral margin. The hard exoskeleton ensures that there is no moisture loss for the housefly in spite of the outside temperatures.

However when it comes to visible identification – the females are a little dominant when it comes to size; are slightly longer than the males. There is a visible larger space in between the compound eyes for a female when compared to the male.

In addition to the above, three physical characteristics are synonymous with houseflies….

Housefly Facts
Fully-grown housefly larvae are 12 – 13mm long and are yellowish-white in color. The weight of the pupae is 8 to 20 mg and can vary in different circumstances.

Physical features of the housefly

The shape of the head is hemispherical and it has two lateral compound eyes & three simple eyes (ocelli) present on the dorsal side. The head contains two mobile antennae and the mouth. The antennae are their primary source of smell and more often than not help identify between the males and females.

Like most species of flies, the housefly too has sponge-like mouthparts. It comprises of the Labella (two fleshy grooved lobes) that is attached to the Labium (lower part of the lip). On the lower surface of labella, numerous transverse grooves serve as liquid food channels. It may be noted that houseflies live only on liquid food. It liquefies (pre-digests) solid food with the help of its saliva, after which the mouthparts act like a sponge and suck the liquefied food. In the lower part of the head, is a membranous projection, called the rostrum, from which the mouthparts are suspended. In the larvae stage, the mouth hooks in the suspension act as filters to feed on large volumes of bacteria. 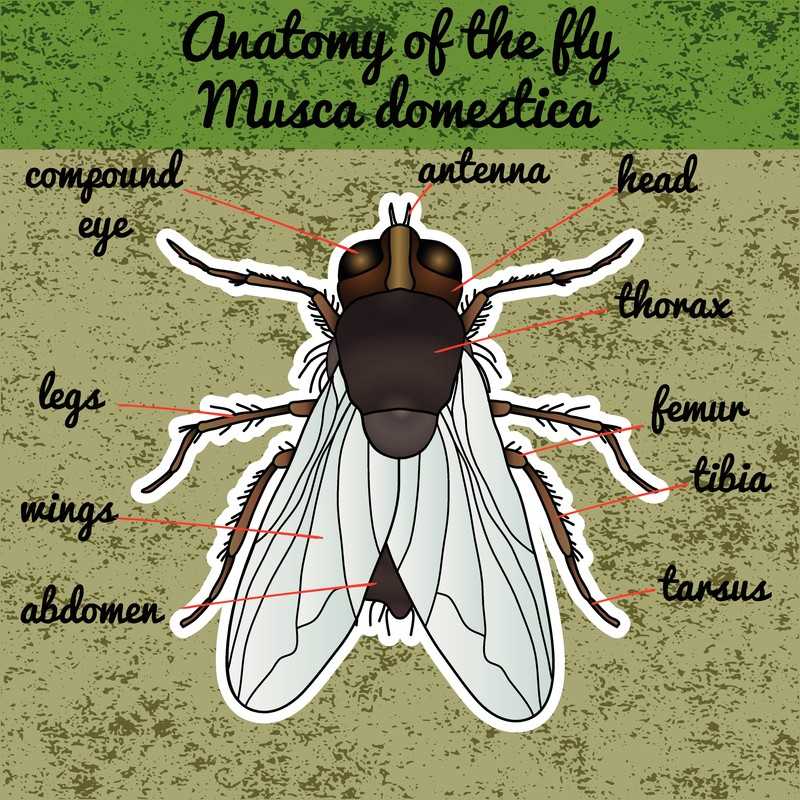 The compound eyes of the housefly are the most complex. The eyes help them cover a greater radius of their body. Because of this feature, the flies are not able to swat or throw a surprise. Studies have revealed that housefly’s eyes collect information from the vestigial organs. It is referred to as halteres and is not referred to as muscles of a single set of wings. The leftovers of the second wings turn into gyroscope and starts relaying signals to the wing muscles that can change the stroke or angle. In less than 30 milliseconds a threat can be detected and the housefly can change it course of flight. The flies are adapted to land and take off from any type of surfaces be it flat, inverted, ceiling or inclined.

The thorax is divided into three segments called the prothorax, mesothorax, and metathorax. Each segment supports two lateral legs. In the mesothorax region there is a pair of wings and in the prothorax holds a pair of spiracles next to the wings. The six legs of the fly are connected to the thorax and are made of five segments. All the limbs connected to the thorax are used for movement. It appears as if the flies have only one pair of wings, but when in actuality tiny secondary wings are present. It is called the ‘halters’ can be seen right below the main pair of wings.

The legs too are attached to the thorax region of the housefly. The taste and sensor are on the cells on the legs. This is one of the reasons for them to rub their legs together. The tiny hairs on the end leg segment (tarsi) act like taste buds on the fly’s legs, enabling it to taste on everything it lands. Hence, you notice houseflies walking in circles on potential food sources. The tarsi secretes liquids that aid flies to walk on the ceiling and on vertical planes acting as grip holds that maintain the surface tension near the feet. There are tiny gripping claws with suction pads (pulvilli) that facilitate the fly to land almost anywhere.

The flies have completely developed wings from the thorax. The wings are translucent and fold from the back. Houseflies like other Diptera (two winged) species, have one pair of primary wings and tiny, secondary hind pair, that are reduced to small halters to support flight stability and balance. Ancestral houseflies had two full set of wings that has been truncated over the period of time, with one full pair of wings and the shrunken appendages we see today below the bigger pair.

Even if one of the halters is removed, houseflies can fly only in circles. If both the halters are not present, the insect cannot take off. The primary wings provide power and accuracy for the instant take off, maneuvering complicated flight movements such as backward maneuvers, zigzags, and tight spirals. Housefly wings have the capability of beating 200-300 times in a second that can enable it to fly at speeds of 4.5 miles (7.24 kms) per hour. The fourth long vein of the wing, known as the Media Vein (M1+2) has a sharp upward bend in the housefly, facilitating such flight behaviors.

Abdomen of the flies

The abdomen is divided into 8 segments in the male and 9 segments in the female. The first five segments are visible in female and the last 4 segments are retracted only to extend while laying eggs. The females are able to bury their eggs several mm using the ovipositor. The sperm depositing aedeagus in males extends when in use and retracts when there is no need.

Having gone through the entirety of the House fly anatomy, it increases the interest to learn more of these common pests that accounts for 91% of flies in human habitations. The very nature of the houseflies spitting their saliva on food for pre-digestion has given them the capacity of carrying over a 100 pathogens that include cholera, typhoid, anthrax and tuberculosis. This potential threat, calls for trapping or killing houseflies in or near residences. The sooner they are removed, the better for residents.

Share
Previous Natural Pest Control Methods To Promote A Healthy Orchard
Next How Do You Control House Flies using Sprays?

Spread the loveHow To Control House Flies at Home? House flies are pesky insects that …